skip to main | skip to sidebar

Studio Safdar is delighted to invite you to the inauguration of Shadi Khampur Neighbourhood Museum, a collaborative initiative of Ambedkar University, Delhi and Jana Natya Manch on Wednesday 26th December, 2012 at 4.30 pm. The exhibition will be open  everyday till 21st January 2013 for public from 12 noon to 7pm.  Your presence is most welcome and desired. 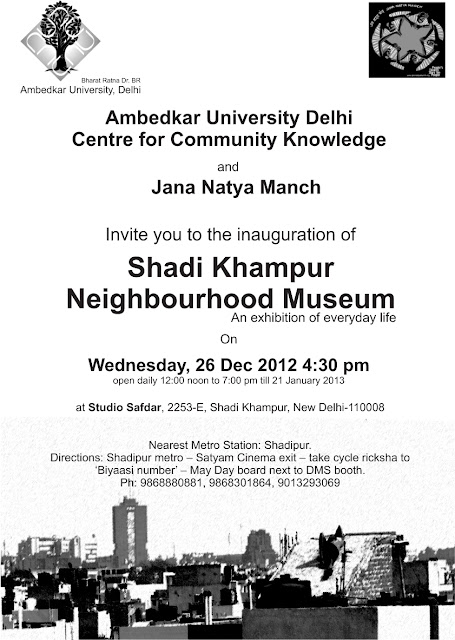 Theatre in Times of Turmoil

I was in Thrissur, Kerala last December for the 1st International Theatre Festival of Kerala. There I had the opportunity to meet three very talented and illustrious theatre groups from three of our neighbouring countries - Ajoka from Lahore, Pakistan, Aranyak from Dhaka, Bangladesh and the Ediriweera Sarachchandra Research and Activation Foundation from Sri Lanka. These performers of these groups were extremely talented and were skilled in various branches of performance - acting, singing and dancing.

One of the most memorable moments of the festival was a late night impromptu music and dance session which the actors shared - actors from Pakistan and Bangladesh - I was possible the only Indian in the gathering. The actors gathered together after Ajoka's splendid performance of Bulla. The sound of the indomitable qawals of the troupe drew everyone out of their rooms. Both the Pakistanis and the Bangladeshis joined in singing and dancing. Though it was a party there was no element of western music or dance and this entire bunch of young people enjoyed themselves for almost three hours of booming melodious music.

Even at the festival war loomed over. It was just a month after the dastardly terror attacks in Mumbai. The some of the actresses of Ajoka could not come to perform as their families in Pakistan did not think it safe for them to come to India in the jingoistic atmosphere. Some members of the Ajoka team who had planned to stay back in India a little longer to meet friends, were advised to return with the rest as "war" could break out at any moment. We read on the internet conflicting news reports of the armies of India and Pakistan eye-to-eye at the border.

Thankfully, no war happened. In fact, within a few days I had the happy occasion to watch Ajoka perform yet again - Hotel Mohejodaro at Bharat Rangmahotsav of the NSD. This time the Ajoka actresses could make it. The play was performed before a packed house amidst tight security.

The Bangladeshi participants in Kerala were also in anticipation of the results of the general election back home.

Right now all three countries are in midst of political and military turmoil. Pakistan with Nawaz Sharif's Long March and the Taliban take over of the Swat; Bangladesh with the BDR rebellion and the Tamil civiians caught in the war betwen the Sri Lankan army and the LTTE.

I believe that the actors and the performers who got together to put up great entertainment in Kerala will play a role in fighting bigotry and bringing a smile to the faces of those who live in troubled times.
Posted by Arjun at 7:00 AM No comments:

The Janam Blog: To record our observations

This blog is a new avenue for all in Janam to express our opinion and ideas about our theatre and art. Feel free to post a blog. Some of us have already been added to the list of people who can post blogs.

If any of you wish to add your email to the list of people who can post please send a request to jananatyamanch@gmail.com.
Happy blogging.